$40 million Northern Carve Out funding for housing in Yukon announced 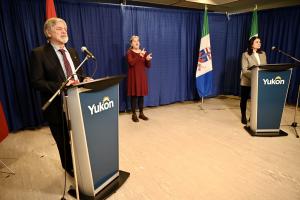 Every Canadian deserves a safe and affordable place to call home.

Funding is delivered through the National Housing Co-Investment Fund (NHCF), as part of a northern carve-out specifically created for Yukon, totalling $40 million. Announced today, $20 million will be administered by Yukon Housing Corporation to address identified housing pressures in rural communities and in Whitehorse, to increase choice along Yukon’s housing continuum with particular focus on affordable accessible housing.

The other $20 million will go toward the new construction of mixed-income, mixed-tenure, and mixed-use affordable housing, supporting indigenous governments, community housing providers and private sector projects.

Our Government is investing in affordable housing in Yukon and across Canada to help create jobs and improve the quality of life for those who need it most. This investment will help improve housing affordability, accessibility, and energy efficiency in Yukon, and soon many individuals and families will have a new place to call home. We are providing a helping hand to vulnerable Canadians, and are ensuring that the economic and social needs of residents across Yukon are met.

This funding aligns with the Housing Action Plan for Yukon and allows the Government of Yukon to respond quickly to specific and unique housing pressures we see in the territory. We will use this funding to address housing needs in our Yukon communities, focussing on our commitments to help Yukoners age in place and find affordable housing that meets their needs.

The work we are doing here through the National Co-Investment Fund is going to be transformational for so many people and families in Yukon. By engaging a portfolio approach with Yukon Housing Corporation we are able to cut down on time it takes to deliver housing, which is crucial to tackling the housing crisis. This important funding will help improve housing affordability, deepen our collaborative ties with Yukon Government and help get the local economy moving again.