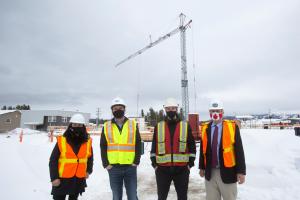 Every Canadian deserves a safe and affordable place to call home.

Today, Minister of Families, Children and Social Development and Minister Responsible for Canada Mortgage and Housing Corporation (CMHC) Ahmed Hussen, along with Minister Responsible for Yukon Housing Corporation Pauline Frost and Larry Bagnell, Parliamentary Secretary to the Minister of Economic Development and Official Languages (Canadian Northern Economic Development Agency) and Member of Parliament for Yukon, announced a Government of Canada funding contribution of up to $34.5 million, in addition to approximately $4.5 million from the Government of Yukon for an 84-unit supported housing development for seniors in Whitehorse.

This new Normandy Manor development will be built and operated by KBC developments, a local partnership of Ketza Construction, Borud Enterprises and Northern Vision Development. Normandy Manor will help fill a gap in the housing continuum by providing housing for Yukon seniors who cannot live independently, but who are not ready to move into continuing care. When complete, the Yukon Housing Corporation will have access to 10 units in the building as part of their community housing stock.

The project is located in the Takhini subdivision of Whitehorse on the Traditional Territory of the Kwanlin Dün First Nation and the Ta'an Kwäch’än Council.

Normandy Manor is receiving support through the National Co-Investment Fund, a flagship initiative of the National Housing Strategy (NHS), the Housing Initiatives Fund and the Municipal Matching Rental Construction program.

Canada’s seniors have shaped this country and contribute to our communities every day. Now more than ever, we need to ensure they have access to a safe and affordable place to call home. Normandy Manor is testament to what can be achieved when all levels of government come together with a shared purpose, and I look forward to seeing the positive impact this project will have on the community in Whitehorse.

We are working hard to increase options for Yukoners across the housing continuum and throughout the territory. This new supportive seniors’ housing project aligns with Yukon’s Aging in Place Action Plan and demonstrates what we can achieve through effective partnerships between the private sector and municipal, territorial and federal orders of government.

Yukon’s seniors deserve a healthy and affordable place to call home. Through the co-investment fund our Government is working hand in hand with the territory and private partnerships to ensure an increased stock of senior specific affordable.

On behalf of Council, I am excited to see more supported housing for seniors in our community. We are proud to contribute to this project through a development incentive and we will continue to work with our government and First Nation partners to help people attain housing across the housing continuum. We are happy to see more seniors staying in Whitehorse and projects like these will encourage even more.

KBC is proud to have developed the first private-sector, seniors’ supportive housing in the territory that will fill a gap in the housing continuum with a product developed, built and owned by Yukoners. We recognize that this project would not be possible without the support of three levels of government, and we join all Yukoners in thanking Canada, Yukon and the City of Whitehorse for their support. When Normandy Manor opens in 2022, we look forward to turning it from a construction project into a community with supports and programs that enable seniors to live long, healthy lives and age in place.