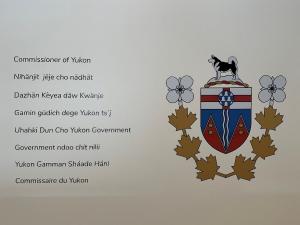 The Commissioner’s office is working with the Yukon First Nations to have “Commissioner of Yukon” translated into the eight First Nations’ languages in the territory. Six out of the eight languages are complete and the last two will be coming shortly.

The Commissioner of Yukon, Angélique Bernard, would like to thank the translators, elders and coordinators: Jane Montgomery, Georgette MacLeod, Teresa Samson, Hazel Bunbury, Deborah Baerd, Martina Volfova and Hammond Dick, the graphic company Inkspirationz and to everyone else who was involved in making this project come to reality.