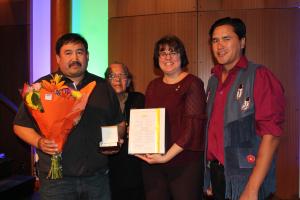 The Honourable Angélique Bernard, Commissioner of Yukon presented George Skookum with the Commissioner’s Award for his volunteer service during the National Aboriginal Hockey Championships in Whitehorse on May 8, 2019, at the Kwanlin Dün Cultural Centre during the Coaches’ Reception.

George was nominated by Marilyn Lawrence and Andrew Glada for his decades-long dedication to coaching youth baseball and hockey in Carmacks. His volunteer efforts have included coordinating travel to tournaments outside Yukon and driving players to games in Whitehorse.

George was surrounded by the youth he has mentored and his family and friends during the award presentation.

It is my pleasure to hand out this award to George Skookum. He is the perfect example of a Yukoner who gives freely of himself to help out his community and territory. Congratulations on this well-deserved award.

George started the Challengers baseball team for the over 15-year-old First Nations youth to be able to have a team and to be able to go to the Indigenous Games. He also coaches the Carmacks Hawks baseball team and the Carmacks Nighthawks hockey team. I know that the positive influence that George has had on the children and youth of the Yukon and their families will continue for many generations.