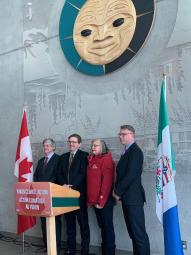 Today, Minister of Environment and Climate Change Canada Jonathan Wilkinson was in Whitehorse to celebrate the expansion of Whitehorse Correctional Centre’s biomass heating system with Minister of Highways and Public Works Richard Mostyn. The project draws funding from Canada’s Low Carbon Economy Fund, as biomass is a low-carbon energy source.

We are proud to invest in the Government of Yukon’s Whitehorse Biomass District Heating System. This project will reduce emissions, make the air cleaner to breathe and create good jobs for Northerners. This project will also serve as an important case study that can encourage more biomass projects in the future.

This investment from the Government of Canada’s Low Carbon Economy Fund is an important step towards reducing the Yukon’s reliance on fossil fuels. In partnership with the Government of Yukon, we are working to find creative northern solutions to climate change.

Biomass is a win for the environment and a win for the economy. It’s a perfect example of what can be achieved through targeted measures. I would like to thank the Government of Canada for its generous support of this important project.