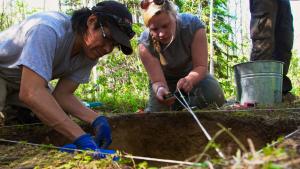 Today at 6:30 p.m., a new film, Crossroads of the Continents, will be launched at the Yukon Beringia Interpretive Centre. Shot and produced in Yukon, the new film showcases the unique scientific discoveries and collaborations between the Government of Yukon and First Nations heritage experts.

Members of the public are invited to participate online through a livestream of the event, which will include a screening of the film, followed by a discussion panel with the filmmakers, scientists and First Nations contributors.

Crossroads of the Continents is an exciting contribution to Yukon’s heritage resources. This made in Yukon film showcases many talented Yukoners and highlights a unique local connection of science, culture, history and discovery.