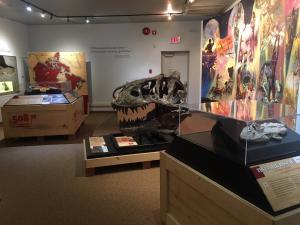 Museums’ Choice: Fossil Favourites from Across Canada is being hosted at the Yukon Beringia Interpretive Centre in Whitehorse. The national travelling exhibit features a 125,000-year-old camel toe bone first discovered at Hunker Creek and will be on display until the end of September.

The exhibit showcases noteworthy fossils from museums across Canada that represent significant discoveries and research. Fossils on display include a replica of Tiktaalik, one of the first vertebrate animals to be able to walk on land, as well as some of the earliest dinosaur footprints, the world’s largest trilobite and a replica skull of a Tyrannosaurus rex.

A special public event to highlight the exhibit will take place at the Yukon Beringia Interpretive Centre on July 3 from 12 p.m. to 3 p.m. Minister Jeanie Dendys and Yukon’s palaeontologist Dr. Grant Zazula will speak and answer questions about the exhibit.

We are excited to be hosting this national exhibit in collaboration with the Alliance of Natural History Museums of Canada. This is an opportunity for Yukoners to have a glimpse into paleontological discoveries that reflect Canada’s diverse natural history. It’s also an extraordinary opportunity to display these collections and share with Yukoners and visitors alike one of our rich discoveries while telling a small part of the Beringian story.