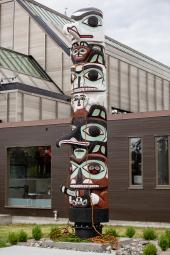 In recognition of National Indigenous Peoples Day, the Government of Yukon hosted a ceremony to unveil the restored BC Centennial Totem Pole. The proceedings featured a prayer, songs, and dancers, as well as remarks by First Nations dignitaries, and Minister of Tourism and Culture, Jeanie Dendys.

The event also included a ceremony by members of the late carver’s family to bestow the totem pole with a traditional Tsimshian name. The name GAWAGANI PTS'AAN means "Peace Totem Pole," and was chosen by the family to honour the essence of the original gift from government to government, as well as the spirit of reconciliation that runs through National Indigenous Peoples Day.

The BC Centennial Totem Pole, carved by hereditary Tsimshian Chief William Jeffrey, was gifted to Yukon in 1971 by the Government of British Columbia on the occasion of that province’s 100th anniversary of joining Confederation. The pole stood for 45 years before being lowered for restoration.

With the permission and consultation of Chief William Jeffrey’s family, the totem pole was restored and relocated to preserve its cultural significance and honour the skill of the artist as well as the art form.

The BC Centennial Totem Pole is a legacy piece that reflects the strong relationship between Yukon and British Columbia. The restoration and unveiling is the result of meaningful and successful collaboration between community members, artisans and knowledge keepers from multiple First Nations. I am honoured to be celebrating National Indigenous Peoples Day with the unveiling of such a beautiful piece of First Nations art.

With this restoration project we have created relationships through collaboration and learning across multiple First Nation communities in BC and Yukon. Working together, we built upon my grandfather's legacy and my mother's lessons to ensure strength for our future generations.

Carved by hereditary Tsimshian Chief William Jeffrey (1898 - 1995) on behalf of the Government of British Columbia, the BC Centennial Totem Pole was gifted to Yukon in 1971 on the occasion of British Columbia’s 100th year since joining Confederation.

The British Columbia Government presented totem poles to each of the provinces and territories, as well as the federal government, to mark this event. In July of 1971, the totem was received in Whitehorse and a ceremony was held on July 28,1971 for its installation and presentation.

Recognizing the importance of the territory’s cultural heritage, and of coming together to learn and adapt methods to care for and respect these items, a restoration project was undertaken to revive and preserve the totem after it had stood in place for 45 years.

Between 1971 and 2016, the totem pole stood outside the Government of Yukon Main Administration Building along Second Avenue and was cared for as part of the Yukon government’s collection of public art.

Traditionally, totem poles have been left to deteriorate naturally over time but contemporary First Nation and art preservation practices now support restoration to retain their cultural significance and honour the skill of the artists and the art form.

In July of 2016, with the permission of Chief William Jeffrey’s family, a restoration project was undertaken, beginning with a small lowering ceremony involving local First Nation advisors.

The Department of Tourism and Culture’s Arts Section worked with Andrew Todd, the leading totem pole conservator in Canada, to restore the totem. Keith Wolfe Smarch and Aaron Smarch (lead and assistant carvers with the Carcross/Tagish First Nation carving program) assisted with the restoration, which included surface cleaning, applying new paint and a protective coating, and repairing damaged areas.

The Government of Yukon worked with a planning committee made up of members of the Jeffrey family, the restoration team, and Yukon First Nation advisors to ensure traditional knowledge, protocols and the wishes of the family were respected and incorporated throughout the project.

Upon its reinstallation and unveiling, the totem will be routinely examined and maintained by Arts Section staff and conservators as appropriate.