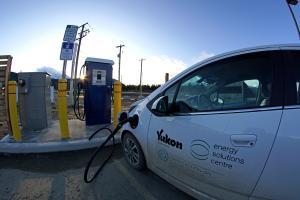 The Government of Yukon has installed the territory’s first electric vehicle fast-charging stations. The three new stations are located in Whitehorse and Carcross and were built with financial support from the Government of Canada.

The Level 3 fast-charging stations can charge an average electric vehicle battery to 80 per cent in about 20 minutes. The units can be found in Whitehorse at the Yukon Visitor Information Centre and the NorthLight Innovation Hub, and in Carcross at the Carcross/Tagish First Nation Learning Centre. They are ready for use and add to Yukon’s three existing lower powered, Level 2 chargers. Charging at all six stations is free for the public.

The new stations were installed through a partnership between the Government of Yukon, Carcross/Tagish First Nation, Northern Vision Development, Yukonstruct, Yukon College Innovation and Entrepreneurship, and ATCO Electric Yukon.

The Government of Yukon will be working with local partners to install two additional charging stations in Marsh Lake and Haines Junction in 2020.

These new fast-charging stations reflect our government’s ongoing efforts to find clean alternatives that reduce our reliance on fossil fuels. We appreciate the support of our partners in advancing our collective vision to increase the use of zero emission vehicles in Yukon. The work we have done to date is just the first step in exploring options for charging stations on highways that connect with our neighbouring jurisdictions.

Northern Vision Development is proud to partner with the Government of Yukon’s on this exciting initiative. Charging stations are a real-world example of how we can take steps to encourage Yukoners to make environmentally friendly choices. The fact that the charging station is co-located in the same mall as the Northlight Innovation building is particularly special, because it helps to illustrate the value of innovation and partnership at a community level.

We are proud of our partnership with Natural Resources Canada and Government of Yukon’s Energy branch to bring these EV charging station into our territory. We are passionate about supporting opportunities that help Yukoners be a part of and drive change that creates a more sustainable world. Partnerships like this enable us to collectively take action toward the United Nations Sustainable Development Goals, celebrate sustainable technologies and their innovative implementations in Yukon.

As a hub dedicated to collaboration and innovation, we're thrilled to be a partner in this project that brings together research, industry and government, with the goal of driving forward clean energy alternatives.