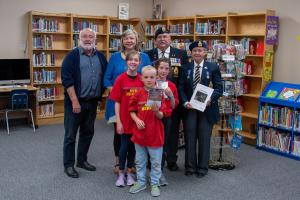 The Royal Canadian Legion Branch 254 has donated $21,000 worth of DVD documentaries and educational plans for Yukon students to learn more about the significant service and sacrifice made by Canadian veterans.

These resources will be available to teachers in all Yukon schools and in Yukon libraries by this fall.

We recognize and honour the service and sacrifice of Canadian veterans. I thank the Whitehorse Legion for this initiative and their generous donation, which will ensure all Yukoners, including younger generations, learn more about our history and those who have protected the freedoms we enjoy today in Canada.

The Whitehorse Legion is proud to share the Canada Remembers resources with Yukoners. It’s wonderful to see our veterans share their stories and memorialize what they’ve been through. We must not forget what Canadian veterans have given us. We want future generations to learn about their service and sacrifice for years to come.