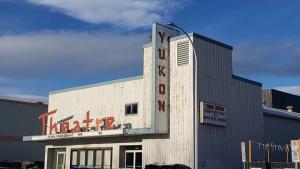 This is a joint release with Yukon Film Society

Yukon Film Society will be reopening the iconic Yukon Theatre located at 304 Wood Street in Whitehorse with a long-term plan to renovate the space to act as a social hub for gatherings, film screenings and a space for lectures, performing arts, concerts and other cultural presentations.

The Yukon government is providing the Yukon Film Society with $35,000 to assist with operations and renovations, which include a structural inspection, investigating any health and safety upgrades required and consulting an accessibility contractor, as well as an energy audit. Yukon Film Society will contribute funds from its operating capital as well as from the revenue generated in operating the theatre.

The Society plans to hold several two-week runs of new release films, as well as the Available Light Film Festival during the first five months of operations. The Society will continue to work on planning and strategic partnerships to support operating this community arts building in the long term.

The Yukon Theatre has been a fixture of the downtown landscape for many years and a symbol of Yukoners’ love of film. The Yukon Film Society’s plan to reopen the theatre for festival screenings and first-run films is exciting and I applaud their efforts to make this a reality. Our government is pleased to contribute to a new vision for the Yukon Theatre and I look forward to seeing the possibilities the future brings.

Yukon Film Society is uniquely positioned to bring cinema back to Whitehorse for the enjoyment and benefit of all Yukoners. We have decades of experience managing cinema, media art exhibitions, performing arts events, supporting filmmakers in the production of their work, and with the annual multi-faceted Available Light Film Festival. This project is the natural evolution for the Society, and the potential for hosting many of our activities in an historic downtown community venue that operates year-round is an exciting prospect for our team, and a dream-come-true for the thousands of members and supporters of the Society.