The Canadian government, concerned about the number of American miners in Yukon and wanting to maintain Canadian sovereignty over the area, sent Inspector Charles Constantine to survey conditions and assert Canadian authority. 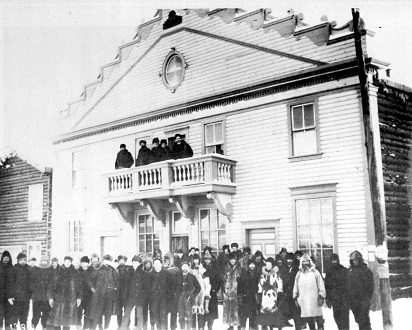 Thomas Fawcett was born on October 28, 1848 in Scargill, England. It took him a month to reach Dawson City after his appointment. With as many as 100,000 pieces of paper to process, he was swamped by the demands of the job. Fawcett slept in the office to prevent theft and would sprint out at lunch with his head down to keep ahead of anyone wanting to speak to him. People were unhappy with him and there was quite the celebration when he was replaced. Fawcett died on November 18, 1920 in Ottawa, Ontario.

In the photo, Fawcett is included in the crowd in front of the Commissioner’s Office 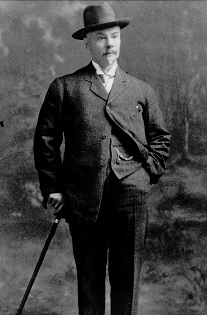 Charles Constantine was born on November 13, 1846, in Bradford, Yorkshire, England. He was sent to Yukon in 1894 to investigate the conditions due to concerns raised by several American miners and was responsible for upholding Canadian sovereignty and maintaining law and order. After a four-week stay, he recommended a NWMP force be sent to Yukon. He was appointed head of that force in 1895 and helped set up the first NWMP post Fort Constantine, along the Yukon River, at Forty Mile. It was here that Constantine acted in the capacity of magistrate, judge and jury, land agent, gold commissioner and customs officer. It was Constantine who decided that the name for the region would be “Klondike”. Constantine died on May 5, 1912, in Long Beach, California.