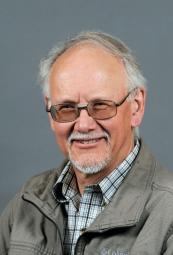 Today, Commissioner Angélique Bernard introduced Michael Gates as the inaugural Story Laureate of Yukon. The Story Laureate will serve as an ambassador for the literary arts, story telling and literacy in the context of Yukon’s past, present and future for two years starting on January 1, 2021.

Michael has lived in Yukon since he was hired by Parks Canada in 1977 to work as the curator of collections at Klondike National Historic Sites in Dawson. While in the position, he was involved in projects including the recovery of silent movie films discovered in 1978 and the restoration of the Commissioner’s Residence that was opened in Dawson in 1996.

Michael is an accomplished author who has written hundreds of articles about museums and Yukon history as well as published six books on Yukon history.

It is my honour to introduce Michael Gates as the Story Laureate of Yukon. I am looking forward to working with Michael to champion the territory’s written and spoken arts and share Yukon stories over the next two years through this new program.

I hope that during my term as the Story Laureate of Yukon I will be able to promote the spoken and written word in the territory and abroad through exploring people, places and events in Yukon where human history goes back farther than anywhere else in Canada