May 1 snowpack continues to set records across the Yukon 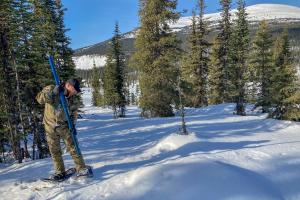 The Government of Yukon Water Resources Branch has released the May 1 Yukon Snow Survey Bulletin and Water Supply Forecast. Results indicate that snowpack continues to be record-setting in the majority of Yukon basins, due to both historically high snowfall throughout the winter and a colder than average month of April delaying the onset of snowmelt.

The Alsek River Basin, the Upper Yukon River Basin (Southern Lakes and Whitehorse) and the Porcupine River Basin, have well above average snowpack for May 1.

Record-setting May 1 snowpack in many watersheds in the territory creates a high potential for spring snowmelt driven flooding in Yukon communities. The weather in May and June will influence the timing and severity of snowmelt peak flows.