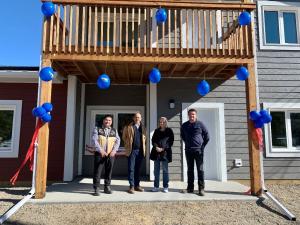 The $1.7 million project was built with support from the Government of Canada’s Rapid Housing Initiative grant and contains two one-bedroom homes and one two-bedroom home. Two of the homes are accessible, all the homes are designated for vulnerable citizens and one is specifically designated for women and children. The homes will remain affordable for a minimum of 40 years.

Tenants for the new homes will be selected in the coming weeks from the Yukon Housing Corporation’s waitlist.

There is no relationship more important to our government than the one with Indigenous Peoples. That is why through the Rapid Housing Initiative, over 40 per cent of all units will support Indigenous housing across the country, including right here in the Yukon. This is our National Housing Strategy at work.

Federal Minister of Housing and Diversity and Inclusion Ahmed Hussen

By working with our federal and local partners, we are providing more affordable homes for Yukoners across the territory. These new homes in Watson Lake will help provide a safe, affordable and accessible place to call home for families and vulnerable women and children.   Thank you to the Yukon Housing Corporation, the Government of Canada and all of our partners who have helped ensure this community project could be built and will soon be open for Yukoners to move into.

The 10-year, $72 plus billion National Housing Strategy is working to ensure more affordable housing for Indigenous communities. At such a critical time, these developments will provide community members with stable housing and direct access to supports and other resources, to assist them in their journey to find reliable and secure housing. Today’s announcement in Watson Lake is just one example of how we’re working to make a difference for those who are most in need.

Liard First Nation is continuously fostering a relationship of cooperation for the benefit of all Yukoners.

On behalf of the Town of Watson Lake we would like to thank Yukon Housing and the Yukon government for continuing to support our social housing needs. The Watson Lake Rapid Housing Initiative triplex is a welcome addition in our community. We look forward to working with you on many more projects such as this, to help tackle Watson Lake’s housing shortages.