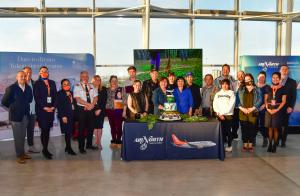 A third event was held Wednesday evening at CIBC Square in downtown Toronto to highlight the Yukon's many cultural and natural wonders. Works from the Yukon Permanent Art Collection and the Yukon Prize for Visual Arts were exhibited as well as Travel Yukon promotional displays. There was also a performance by the Teechik Dancers accompanied by Yukon musicians Boyd Benjamin and Kevin Barr.

These new direct flights between Whitehorse and Toronto will connect the Yukon to Canada’s biggest economic hub and create a new pathway for people from around the world to visit our territory. We are thrilled Air North, Yukon’s Airline is able to offer this new service and we look forward to welcoming more visitors to the Yukon and sharing the economic benefits that come with this additional air access.

Minister of Economic Development and Tourism and Culture Ranj Pillai

Air North, Yukon’s Airline owes our success to key Indigenous and community partnerships, which have allowed us to navigate the many challenges we have encountered during the past 20 years. We are pleased to have added Toronto to our network, ensuring residents of the Yukon’s regional communities have seamless and affordable access to the rest of Canada and the world. This will broaden education, sports and cultural horizons for youth, and facilitate regional economic development. We are proud to make the North a better place to live and work.