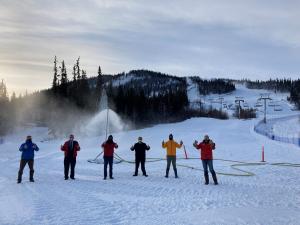 Joint news release with the Government of Canada.

Member of Parliament for Yukon Larry Bagnell, on behalf of Minister for Women and Gender Equality and Rural Economic Development Maryam Monsef, and on behalf of Minister of Infrastructure and Communities Catherine McKenna, and Minister of Community Services for the Government of Yukon John Streicker, announced funding for recreational infrastructure at the Mount Sima ski hill in Whitehorse.

The Mt. Sima pumphouse and electrification project will improve the ski hill’s electricity and snowmaking capacity. The ski hill’s upgrades include new electrical, pumping and stream flow control measures, as well as converting snow-making away from reliance on diesel power. These upgrades will facilitate snow-making opportunities during the low-snow parts of the season, and protect natural surroundings, including Sima Creek.

Mt. Sima is a popular winter destination for all Yukoners, including indigenous and youth groups who travel from outside the Whitehorse area to enjoy skiing and snowboarding activities. This funding will improve the operations of this valued facility, which serves as an important winter activity and skill development venue for Yukon residents of all ages.

It’s more important than ever that Canadians have the opportunity to get outside to stay healthy and active while protecting our natural winter environment. The Government of Canada is investing more than $3.7 million in better winter sports infrastructure for Yukon skiers and snowboarders, including upgrades to electrical and pumping systems, improved snow-making operations and eco-friendly lighting on Mt. Sima. Canada’s infrastructure plan invests in thousands of projects, creates jobs across the country, and builds cleaner, more inclusive communities.

Mount Sima has recently emerged as a destination training facility for elite Canadian athletes, including Olympic gold medallists. These upgrades to the electricity and snowmaking capacity will allow Mount Sima to provide more training and special events while reducing their dependency on diesel. Our government is committed to supporting transitions to green energy around the territory and at the same time supporting our local recreation infrastructure. We look forward to seeing Mount Sima continue to offer safe quality outdoor experiences for Yukoners.

Chantalle Aubertin
Press Secretary
Office of the Minister of Infrastructure and Communities
613-941-0660
chantalle.aubertin@canada.ca