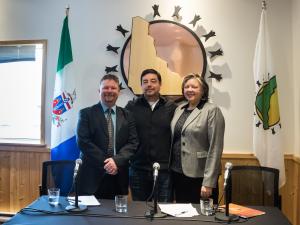 The Government of Yukon is funding a $530,000 three-year pilot project to develop a Gladue Report Writing program for Indigenous offenders. The pilot project will provide training to Yukon-based writers to produce high-quality, standardized Gladue reports and cover the costs of report writing. It will be led by a committee of representatives from Yukon First Nations, the Legal Services Society of Yukon and the Public Prosecution Service Canada.

Gladue reports include more in-depth information on Indigenous offenders’ personal circumstances than pre-sentence reports and include systemic factors which could have contributed to their offending behaviours. The reports may also include information on possible sentencing procedures and outcomes which may be more suitable in view of the offender’s heritage.

Factors considered in Gladue reports can include effects of the residential school system; experience in the child welfare system; family and community history; substance abuse; victimization; and poverty and poor living conditions. The reports assist judges in understanding the unique circumstances faced by Indigenous offenders and include recommendations for restorative or rehabilitative sentencing options.

The pilot project will complement Gladue report training that began in November 2017 through the Council of Yukon First Nations.

This pilot project addresses a longstanding gap in our justice system. For nearly 20 years, Gladue reports in Yukon have been written on an ad hoc basis and without proper support.  Creating a group of trained, local Gladue report writers will ensure sentencing judges have access to high-quality reports that detail the unique systemic factors that may have brought a particular Indigenous offender before the courts. They will also help judges consider alternative sentencing options, providing an opportunity to reduce the number of Indigenous persons involved in the justice system.

Yukon First Nations are encouraged by the announcement of the Gladue pilot project, as it is long overdue in the Yukon. Yukon First Nations are overrepresented in the criminal justice system and it is our hope that a Gladue Report program will assist in raising awareness and understanding about the unique systemic factors faced by First Nations, while recommending restorative and healing options.

Indigenous offenders are over-represented in admissions to provincial and territorial correctional services across Canada. In Yukon, the average percentage of Indigenous inmates admitted can reach 70 percent while Yukon First Nations make up 23 percent of the population.

The high rate of incarceration for Indigenous peoples has been linked to factors including: effects of the residential school system; experience in the child welfare and/or adoption system; effects of the dislocation and dispossession of Indigenous peoples; family or community history of suicide; substance abuse and/or victimization; loss or struggle with cultural/spiritual identity; lack of formal education; poverty and poor living conditions; and exposure to Indigenous street gangs. Considering these factors in pre-sentence and bail reports became necessary after the 1999 Supreme Court of Canada decision in R. v. Gladue (and the later Ipeelee case).  Changes to the Criminal Code of Canada and the Youth Criminal Justice Act codified this and made it part of Canadian law. The Criminal Code of Canada mandates that “all available sanctions other than imprisonment that are reasonable in the circumstances should be considered for all offenders, with particular attention to the circumstances of aboriginal offenders.”

Since the law of Canada changed, Gladue reports have been necessary in all pre-sentence and bail reports, here in Yukon and in the rest of Canada. Up to now, Yukon has had no trained Gladue report writers resulting in untrained personnel producing such reports. Because of this, the reports created have been uneven in quality and have occasionally been rejected by the Yukon judiciary as being of inadequate quality for use in deciding a court matter. The rejection of pre-sentence and bail reports can cause greater delays in court processes.  The lack of trained Gladue writers was recognized as an ongoing challenge to the Yukon justice system.