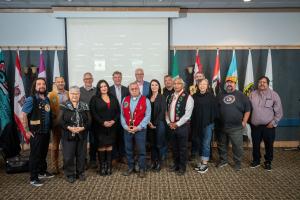 Leaders discussed the evolution of the Yukon Forum and the Joint Priority Action Plan, and ongoing efforts to strengthen collaboration between governments. They also discussed collaborative approaches to the expansion of the Sexualized Assault Response Team to communities, partnerships to advance housing solutions throughout the territory, and the Government of Yukon’s response to the Office of the Auditor General of Canada's report on the state of housing for vulnerable Yukoners.

It has been six years since we revitalized the Yukon Forum as part of our government's commitment to building strong government-to-government relationships with Yukon First Nations. The Yukon Forum has been integral to developing collaborative working relationships and ensuring cooperation in governance in the territory between the Government of Yukon and Yukon First Nations governments. The vision of our collective leadership, and the hard work of our senior officials, has established a strong foundation to move the territory forward for the benefit of all Yukoners.