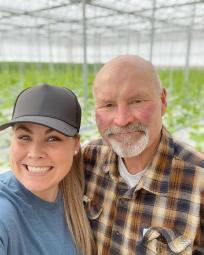 The Government of Yukon is recognizing Lorne Metropolit, owner and operator of Yukon Gardens, as the 2022 winner of the Yukon Agriculture Award. Lorne is being celebrated for his decades of work developing agriculture and building food security in the Yukon.

In 1985, Lorne started Yukon Gardens as a show garden to demonstrate what can be grown in the north’s cold climate. Over 40 years later, the family business has expanded to grow greenhouse produce that can be found on the shelves in most of Whitehorse’s grocery stores. Over time, Yukon Gardens has become the Yukon’s largest family-run greenhouse and garden centre operation and grows tomatoes, peppers, cucumbers and lettuce.

In the late 1980s, Lorne was promoting northern agriculture nationally on CBC’s Canadian Gardener television show and was featured more recently on the cover of Greenhouse Canada for his hydroponic greenhouse heated with biomass. Lorne has also delivered many gardening programs at the local correctional facility, communities and schools across the Yukon.

The Government of Yukon’s Yukon Agriculture Award is part of the 2022 celebrations for Canada’s Agriculture Day.

Congratulations to Lorne for winning the Yukon Agriculture Award. Lorne’s dedication to growing produce in the north has helped expand the Yukon’s agricultural sector and highlight what can be grown in our climate. His resilience, innovation and hard work has ensured that Yukon Gardens’ greenhouses continue to put healthy, nutritious food on the tables of Yukoners and is an example of the territory’s ability for self-sufficient food production.