Northern Premiers discuss prosperity, reconciliation and sustainability in the North 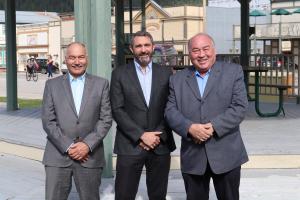 The Premiers discussed building sustainable and thriving communities across the North and agreed to pursue long-term federal support for:

Resilient transportation infrastructure was also identified as an important foundation for economic growth, as climate change continues affecting northern regions faster than the rest of Canada. The meeting was an opportunity to identify common priorities in advance of the Western Premiers’ Conference and the Council of the Federation meeting this summer.

It was a pleasure to host my territorial counterparts in Dawson City, on the traditional territory of the Trondëk Hwëch’in. The issues facing the North are complex, from climate change to sustainable development to mental health. By working together, we can raise the profile of our priorities and cooperate on identifying solutions that will increase the prosperity and quality of life for northern Canadians in all three territories.

Creating a strong and sustainable north remains a priority for the Government of the Northwest Territories and is central to Canada's identity on the world stage as a northern nation. Meeting as Northern Premiers to discuss common interests and how we can collaborate to strengthen the north by addressing shared challenges like the impacts of climate change, sustainable development, and the high cost of energy has always been an important way for our three territories to work on behalf of northern residents.

It’s always a pleasure to meet with my colleagues from the Northwest Territories and Yukon. Our jurisdictions are vibrant, unique and fiercely proud. Despite our differences and challenges, we stand united as Northern Canada, and firmly advocate for the interests and needs of the Arctic. As always, we are stronger together.