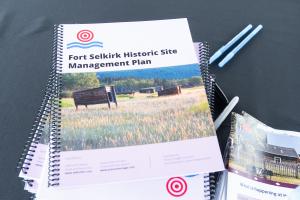 Last Friday, the Government of Yukon and the Selkirk First Nation signed the updated Huchá Hudän Fort Selkirk Historic Site Management Plan at a ceremony held at the site.

The updated management plan reflects a shared vision for the future of the site and will ensure that the heritage and cultural values of the Selkirk First Nation continue to be protected and interpreted for everyone to appreciate. As co-owners and co-managers of the site, the partnership between the Selkirk First Nation and the Government of Yukon illustrates the continuing spirit of cooperative care for Fort Selkirk. Both partners will continue to conserve the Fort Selkirk Historic Site by each contributing financial support, human resources and expertise.

Fort Selkirk is a 50-hectare site in the Traditional Territory of the Selkirk First Nation overlooking the confluence of the Yukon and Pelly rivers. From the mid-1800s until the 1950s, the site was a lively multicultural community featuring trading posts, Christian missions and a North-West Mounted Police post. Northern Tutchone people and early settlers on the site lived together until Fort Selkirk was largely abandoned following the construction of modern roads.

Fort Selkirk is recognized for its historical importance as a gathering place and a community for Indigenous and non-Indigenous people, where trade and social activities took place and where development in the region started. Today, Fort Selkirk is actively used by Selkirk First Nation Citizens, Yukoners, river travellers and tourists. It is only accessible by boat in the summer months.

Fort Selkirk is a special place that truly represents a living history and culture. Its traditional and contemporary use are important to protect, conserve and interpret. The Government of Yukon is committed to collaborative solutions to heritage management in the territory.

For generations, Fort Selkirk has been a gathering place where trade, game harvesting, potlatches and other cultural activities take place. A network of traditional routes that pass through this region connected people from all walks of life. We want to preserve this sacred and important area, and the management plan for Fort Selkirk is key for that conservation. Developed collaboratively with Yukon government and Selkirk First Nation citizens and staff, the 2021 Management Plan identifies long-range goals, objectives and policies that will guide the protection, conservation and interpretation of Fort Selkirk’s many heritage resources. By signing this management plan, we honour our ancestors and others who created this beautiful place and ensure that future generations will know its exceptional history.

This new management plan is the result of a thorough, inclusive and timely planning process, one that recognizes how important Fort Selkirk and its stories are to so many people. The Board is pleased to have been part of the process.