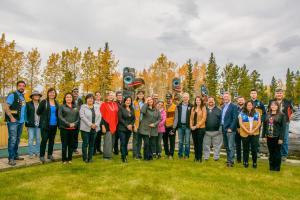 This Forum marks the second year of implementing the Joint Action Plan of the Yukon Forum. Leaders discussed several shared priorities such as justice, family and children services, and Yukon Days, a yearly meeting of Yukon leaders with federal Ministers in Ottawa. Leaders also received an update from the Yukon Advisory Committee regarding the National Inquiry into Missing and Murdered Indigenous Women and Girls.

The final report of the independent review of the Yukon Fish and Wildlife Management Board was presented to the Yukon Forum. The report includes recommendations calling on all parties to work with the board to strengthen public accountability, improve board oversight and leadership, and build clarity and collaboration on Yukon’s fish and wildlife management structure.

The Yukon Forum has been instrumental in building a solid foundation of trust and respect between the Government of Yukon and Yukon First Nations. The Joint Action Plan has focused our efforts and continues to guide our work supporting healthy and vibrant communities across the territory. The commitment by all of our governments to work collaboratively through open dialogue is allowing us to make on progress on issues, such as fish and wildlife management, that benefit all Yukoners.

Continuing our work together on these matters, strengthens our governments and our territory. We are advancing and resolving important issues creating a positive future for our citizens.