Leadership gathers for Yukon Forum in the territory’s northernmost community 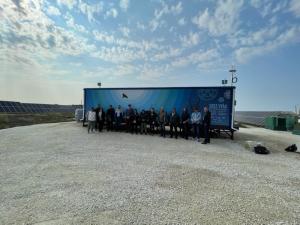 Today, Premier Sandy Silver and his Cabinet, Council of Yukon First Nations Grand Chief Peter Johnston and the Yukon First Nations Chiefs met in Old Crow at the Darius Elias Community Centre, and virtually, for the Yukon Forum. This is the first time the Forum has been held in Old Crow and is one of the first events to be hosted at the new energy efficient community centre, which opened last month.
Conversations at the forum centred on renewable energy and climate change. An update was also provided on the work being done to address the four pathways outlined in Changing the Story to Upholding Dignity and Justice: Yukon’s Missing and Murdered Indigenous Women, Girls, and Two-spirit+ People Strategy released in December 2020. The strategy commits to ending violence and changing the story for Indigenous women, girls and Two-spirit+ people in the Yukon.

While visiting the community, leaders had the opportunity to tour Sree Vyàa, the Old Crow Solar Project, located on Vuntut Gwitchin First Nation Settlement Land and supported by Yukon government’s Independent Power Production Policy. Sree Vyàa is reducing greenhouse gas emissions and is decreasing the amount of diesel fuel that is flown in to Old Crow. The project is owned and managed by Vuntut Gwitchin First Nation and is pivotal in the Vuntut Gwitchin Government’s vision of reaching net zero carbon emissions by 2030.
The Government of Yukon, Yukon First Nations and ATCO Electric Yukon are working together with the goal of reducing the use of diesel to generate electricity in off-grid communities by 30 per cent.

It was a pleasure to be able to host the Yukon Forum for the first time in Old Crow and in the new Darius Elias Community Centre. Today’s meeting highlighted the importance of our ongoing work together to address the impacts of climate change to protect First Nations cultures, ways of life and well-being. We also reaffirmed our commitment to ending violence against Indigenous women, girls, and two-spirited+ people and the Yukon’s renewable energy capacity.

CYFN is pleased to see the continued commitment to Yukon Forum demonstrated by leaders as we come together in Old Crow to discuss issues impacting Yukon First Nations. The meeting encompassed discussions and updates on wide-ranging issues including climate change, renewable energy, and addressing MMIWG2S+.

We welcome the Yukon Forum to Old Crow to see firsthand the leadership of Yukon First Nations in addressing climate change. Sree Vyàa, the Old Crow Solar Project, is just the beginning of our work implementing climate solutions in the North. As we continue on the path toward a low carbon world, we see a better future for our community and our people.