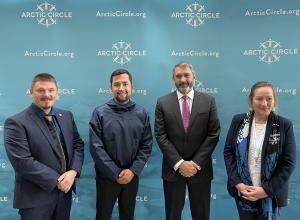 Premier Sandy Silver represented the Yukon and advanced a number of key northern discussions at the Arctic Circle Greenland Forum, which took place from August 27 to 29 in Nuuk, Greenland.

Premier Silver, Nunavut Premier P.J. Akeeagok and Northwest Territories Premier Caroline Cochrane promoted a more secure, healthy and sovereign Arctic as they addressed the Opening Plenary of the Forum following Greenland Prime Minister Múte B. Egede. It was the first time Canada’s three territorial Premiers have addressed the Arctic Circle. All four leaders agreed it is essential that northerners and Indigenous people are involved in decision-making around the future of the Arctic.

The three territorial Premiers led a panel discussion, Healthy Communities: Setting the Conditions to Strengthen Security and Sovereignty in Canada’s North, moderated by Dr. Whitney Lackenbauer, Canada Research Chair in the Study of the Canadian North at Trent University, who specializes in Arctic security, sovereignty and governance issues. The Premiers highlighted initiatives underway in the three territories and emphasized the importance of investing in housing, healthcare, education and infrastructure to build healthy, vibrant and resilient communities in Canada’s North. All 13 of Canada’s Premiers agree on the importance of strengthening Arctic sovereignty and security and have called on the federal government to identify new financial resources to support sovereignty in Canada’s North and the implementation of the Arctic and Northern Policy Framework.

Premier Silver was joined by Canada’s Ambassador to the Kingdom of Denmark Denis Robert, Northwest Territories Premier Caroline Cochrane, Nunavut Minister of Mines, Environment and Economic Development David Akeeagok, and Parliamentary Secretary for Greenland Jørgen T. Hammeken-Holm for a panel discussion, Critical Minerals Mining and the Arctic in a New Global Era. Premier Silver highlighted the work underway to modernize the Yukon’s mineral resource sector and develop successor resource legislation in partnership with Yukon First Nations governments, industry and stakeholders. The Yukon is poised to play a significant role in the global response to climate change as a stable domestic source for critical minerals that are key to the transition to a greener economy. The Yukon has known deposits of 25 of the 31 critical minerals identified in Canada’s Critical Minerals Strategy. The territory also has a robust and effective assessment and regulatory regime that continues to uphold responsible development in the territory.

It has been an honour to advance key discussions at the Arctic Circle Greenland Forum alongside my fellow Northern Premiers. The Arctic is witnessing the accelerated impacts of climate change and facing new security challenges in light of changes to the geopolitical order. As circumpolar leaders, we need to foster the peaceful, cooperative conditions needed to support sustainable development in the Arctic and strengthen our people and our communities. We have a lot to learn from and share with our friends across the circumpolar North as we work together towards a more peaceful, prosperous and resilient future. The Yukon is poised to play a significant role in supplying critical minerals that support clean energy and the transition to a green economy. By investing in housing, healthcare, education and infrastructure, we can build safe, healthy and thriving communities that are the foundation of a sovereign and secure Arctic.