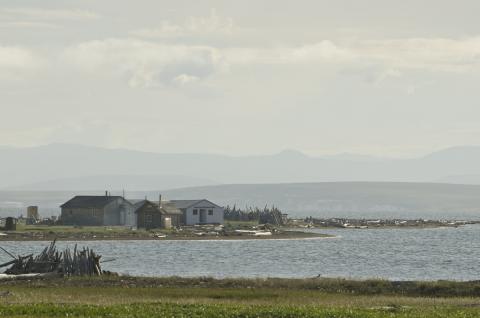 From mid-June to mid-September, you can access the park by chartering a boat or aircraft. You can charter aircraft out of Inuvik, NWT, located 250 km southeast of the park. Boat charters may operate out of various Mackenzie Delta communities.

You are required to get a park permit to land aircraft on the island.

The island is often shrouded in fog, particularly in late summer, which can delay flights for hours or even days. Be prepared with sufficient gear and food.

If you are rafting or kayaking the Firth River on the Yukon mainland, you can end your trip at Herschel Island–Qikiqtaruk Territorial Park. However, you must make prior arrangements for return travel.

Plan to bring all the equipment necessary for independent camping in an arctic environment.

Facilities are limited to driftwood windbreak shelters for tenting, fire rings and driftwood, outhouses and a limited supply of fresh water that needs to be boiled prior to consumption. Park rangers maintain the facilities and offer interpretive assistance at Pauline Cove. The staff includes local rangers who can provide insight into Inuvialuit culture and history.

Overnight camping on the island costs $12 per tent per night. Permits are available from the park rangers. Find out more on the Herschel Island–Qikiqtaruk backcountry camping page.

Herschel Island–Qikiqtaruk Territorial Park lies 5 km off the north coast of Yukon in the Beaufort Sea. This 116 km2 island protects important natural and human heritage. Between land and sea, its dry polar climate is home to a unique array of arctic plants, animals and sea life, including the largest colony of Black Guillemots in the Western Arctic.

This is a living park. It is the home of the Inuvialuit, who have used the site for thousands of years. Signs of their old dwellings are still visible on the island. In the late 1800s, American whalers established a station at Pauline Cove. Several historic structures are still standing. Inuvialuit families use the area for traditional activities and researchers come from around the world to study the island's changing wildlife, geomorphology and climate.

Herschel Island–Qikiqtaruk Territorial Park was designated as a Natural Environment Park in 1987, as a result of the Inuvialuit Final Agreement. This agreement identifies the Yukon North Slope, including Herschel Island, as a special conservation area with the primary purpose of conserving wildlife and habitat and providing for traditional Indigenous use.

Working with the Inuvialuit and their advisory bodies, the Government of Yukon has been primarily responsible for the management and maintenance of the park.

A review of the park management plan was led by a joint committee with Government of Yukon and Inuvialuit representatives.