Your government Service design and improvement 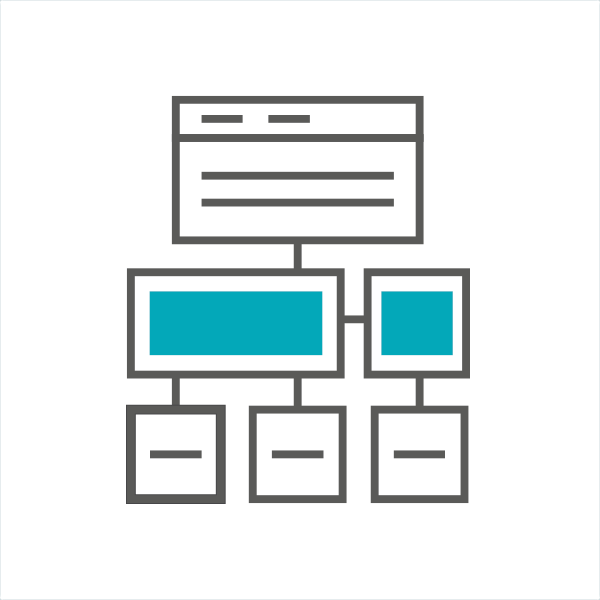 A massive amount of work over the past 3 years has seen every government department move all of their content to Yukon.ca. Stand-alone department websites have now been turned off.

When we started in 2017, the Yukon government had over 13,000 pages of content scattered across more than 20 department websites. We had many different technology platforms to maintain and support.

This has been no cut-and-paste job. Instead, hundreds of people from all departments have worked tirelessly to research and re-write content to meet a user need. They removed or consolidated duplicate content.

The start of a journey

The process of creating what would become Yukon.ca began in May 2015. Some of our goals included a new government website that would be citizen-centred, built on modern technologies and easy to use on mobile phones.

We began with discussions, whiteboard sketches and website prototypes. Here’s an early prototype from December 2015 that was used to explain and share our vision with others. Prototyping is a tool we use to show people what we mean, visually and to get feedback. 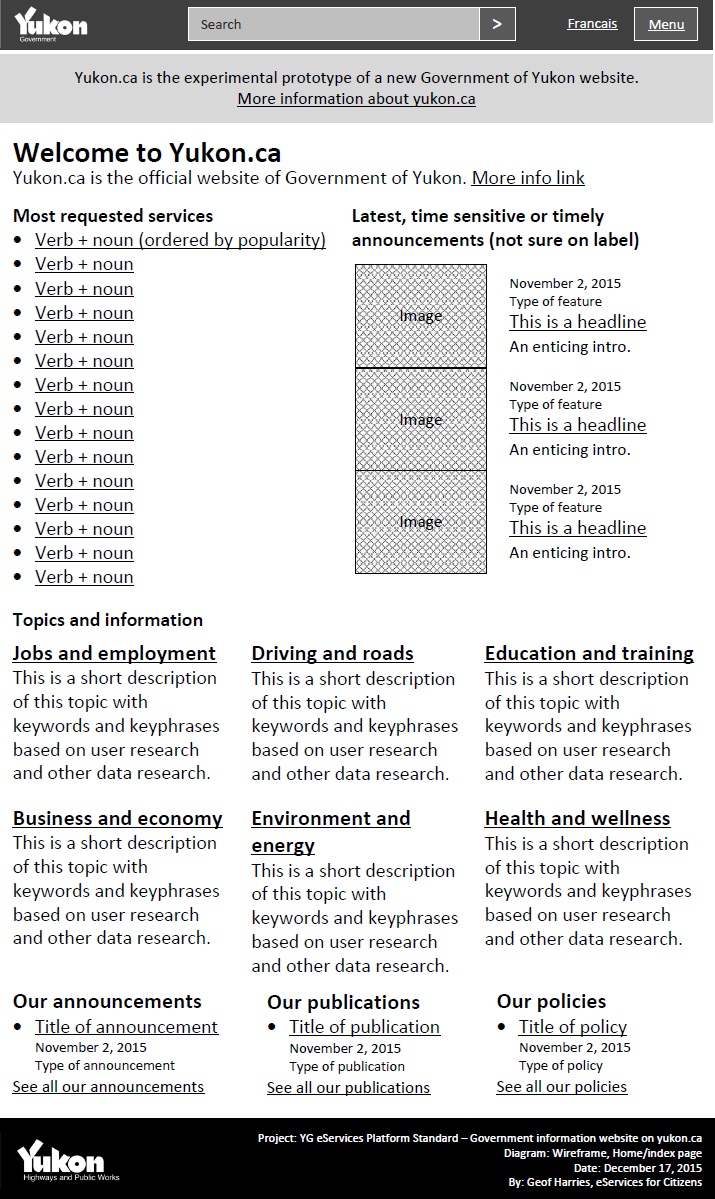 After we got the approval to move forward, we further refined our designs for navigation and pages. The vision for Yukon.ca started to gain shape through a collection of detailed layouts.

Here's another prototype from August 2017. You can see the similarities between it and how Yukon.ca looks today. 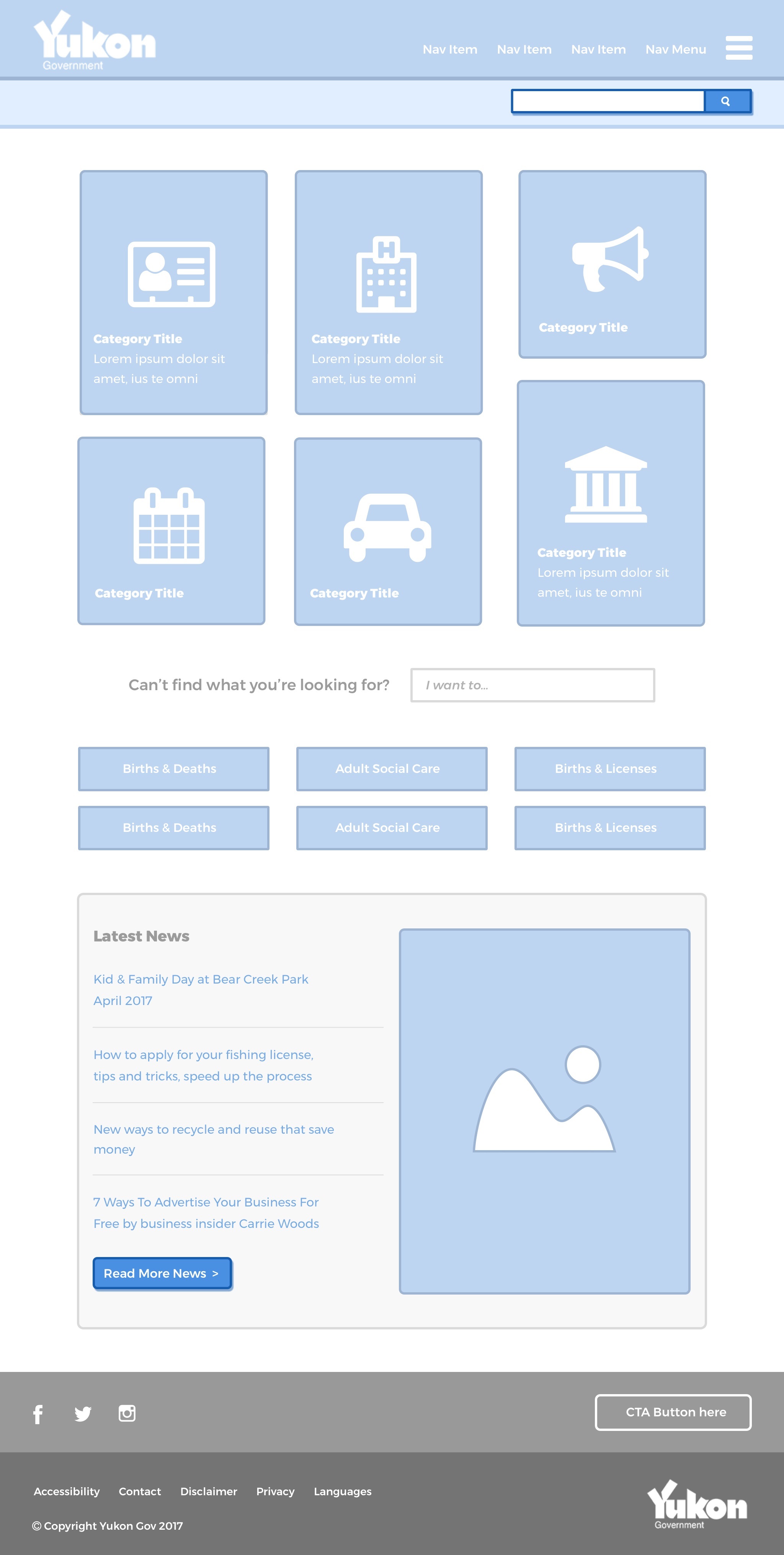 The prototyping and the design and development of the website were relatively easy affairs compared to what had to come next: culture change and the hard work of reviewing and re-writing every page on the old site for the new site.

A change in culture

Getting staff to think and write in terms of user needs has revolutionized the way people across the organization view the web and government online services.

This culture change did not always come easy. Sometimes it took hard conversations to find alignment. We found a good way to show some staff the value of user-needs was to conduct user research and look at web analytics together.

We also provided ongoing support and training. More than 200 people were trained in how to write for the web.

Teams tested content and website prototypes with citizens, business owners and government staff to understand how what we made performed in real situations. It’s both eye-opening and humbling to see how your work affects others.

Building the plane as we flew

On February 19, 2018, we launched Yukon.ca and a new visual identity. The website had 150 pages and just a few features.

We had to get the new website up and running because the old government site was getting more and more unreliable and no longer met our standards. We needed a safe, secure and modern site to help the public have access to the information and services they needed.

In order to get Yukon.ca out the door, we’d trimmed back as much as we could so we could hit our deadline. I remember feeling like we’d propelled a tiny wooden airplane off the runway and were watching it slowly and unsteadily take flight.

Yukon.ca soon balanced itself and we began to add more content, stability and features. There was a rapid amount of improvement made to Yukon.ca during the 1st and 2nd years of its life in order to support the transition of content.

As departments added content and as citizens used the website, we kept on top of our web analytics and monitored feedback forms.

On every Yukon.ca page there is a feedback form and people use these a lot:

The feedback we get is invaluable to help us identity and prioritize improvements we make to Yukon.ca.

People have also changed how they get to Yukon.ca. We’ve seen a huge increase in users, especially in those on mobile phones.

Our world has changed in 2020. The benefits of having a single and simple government website during the COVID-19 pandemic has been well worth the effort.

Some of us have been part of the Yukon.ca transition project since it began 5 years ago.

There have been many, many people along the way who have contributed their time, skills and wisdom to get us to where we are today. Yukon.ca has been a team effort, to say the least.

There’s a group inside of government named the Web Advisory Committee (WAC). WAC is made up of web managers from every department. These are the people who carried the flag of user needs back to their departments. They did the hard work of shepherding and re-writing content. Some of them finished their transition to Yukon.ca earlier than others and turned around to help those who were just starting or were struggling.

Staff in the government’s French Language Services Directorate (FLSD) were incredible partners. FLSD were with us every step of the way, translating each and every page on Yukon.ca so we could meet our requirement for a bilingual website.

The team and leadership in eServices for Citizens made smart platform decisions that would have long-lasting and far-reaching impacts. In Yukon.ca we’ve got a modern, flexible and reliable platform that can support our long-term vision and ever-increasing use.

The editorial team in Executive Council Office (ECO) ran all of our writing workshops, mentored and trained others, produced guidance and evaluated every piece of content that came through from departments. Theirs was a truly heroic effort.

We also thank the senior leaders in the government who believed in our mission and understood why and where we wanted to go with Yukon.ca. Without their influence and support, we would not have achieved what we did.

With department content all in 1 place, we have the full data to see what’s required to run and support Yukon.ca as the single organization that we are.

We’ll continue to address issues, build new features and support others for the purpose of meeting user needs.

For now, we’re going to take a very short break – and a deep breath.

After that, we’ll begin planning what’s next for the Yukon.ca website.